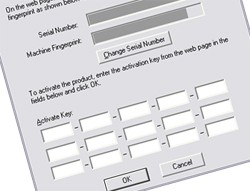 The infamous crimeware kit available to hackers for stealing banking login credentials, known as Zeus or Zbot, now comes locked-down with anti-piracy features similar to those used by Microsoft Windows.

This recent discovery comes as good news to security researchers as this makes it difficult for just any hacker to use the crimeware kit which in return may reduce the number of cybercriminals using Zeus. Zeus uses a key code which is based partly by the machines hardware configuration. In the case that the hardware configuration changes on a certain machine, it can prevent a hacker from running Zeus unless they are able to obtain a new activation code.

The Zeus builder kit, which was primarily designed to steal online banking login credentials, normally sells for USD$3,000 to USD$4,000 which is not a small amount of money for a beginner in hacking, who is not well established in his/her's criminal activities and ultimately wants to get paid.

Hackers locking-down Zeus with an activation key code is almost like setting up a form of anti-piracy for the hackers that sell the crimeware kit. Some of the modules have been known to cost up to as much as USD$10,000. The creators of Zeus have an interest to protect, just like the hackers, the use of Zeus for malicious purposes. Zeus has turned into a "professional hacker" tool instead of one that any amateur hacker can easily get his/her hands on and later get caught by authorities for their criminal activities.

In the past, Zeus was known to be one of the top 10 botnet threats in the United States and the culprit for targeting financial institutions bypassing anti-virus applications. Zeus has infected millions of systems and still continues to be a major threat. Do you foresee other "hacker tools" similar to Zeus getting anti-piracy key codes to protect to creators interest and investment in their malicious software?