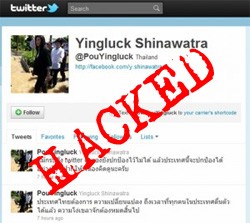 One angry Thailand constituent chose to 'hack' out his or her disappointment with recently elected Prime Minister (PM) Yingluck Shinawatra by using her personal Twitter account as a sounding board.

This past Sunday followers of Yingluck were tweeted eight posts from her own account shedding a negative light on Thailand's first female PM government's policies and rule. Yingluck has been accused of lacking political experience and being a puppet to allow her brother, former Prime Minister Thaksin Shinawatra, to continue operating underground after having been ousted in 2006 on corruption charges. The nasty dismissal and removal by Military coup left a bitter taste in the mouths of Thaksin's supporters, sparking a feud and sometimes violent confrontation with his opponents.

The harsh posts accused Yingluck's government of exploiting the poor and for treating the country like a business instead of a public office serving the people. Anger over Yingluck's handling of the floods has too sparked public criticism. Although written in Thai, below is an English translation of several of Sunday's tweets:

"This country is a business. We work for our allies, not for the Thai people. We work for those who support us, not those who differ with us," said one tweet.
"Where are the opportunities for the poor? We use them, give them hope for votes so our own group can benefit."

The ranting ended with a final tweet taunting its victim:

Thitima Chaisaeng, Thailand's government spokeswoman, confirmed the personal account, registered as Pou Yinggluck, had indeed been hacked and as a result, was suspended pending further investigation.

Yingluck joins other famous figures and organizations who too had their wings clipped by hackers of their Twitter accounts. This list includes Ashton Kutcher, Simon Pegg, Lil Wayne, Axl Rose, Britney Spears, Kirsty Allsopp, The New York Times, NBC News and USA Today. An interesting mix, if I must say so myself.

Unfortunately, this is not the first time hackers used the social engineering tool to wage political warfare, and considering the increase use of this vehicle as a marketing or mass communication tool, it will certainly not be the last. This brings us to the important role Internet security plays in ensuring the integrity of online data and communications by protecting the very system it originates from. Albeit not so easy a task as cybercriminals invest millions of stolen money to learn new techniques and ways to scam others so they can tap into the billion dollar cybercrime industry.

In an unrelated incident, last week hackers vandalized the website of another government agency, Thailand's Foreign Affairs Ministry. The website was renamed 'Kingdom of United States' and the graphic replaced with erectile dysfunction medication advertisements. More serious hacks or breaches occurred when phishing campaigns targeted defense contractors Mitsubishi Heavy Industries, Ltd, Lockheed-Martin, L3 Communications, and indirectly Boeing. As more and more hacks occur, the persons behind these sinister acts gain confidence and having not been caught, feel 'untouchable', which is extremely dangerous.

Unfortunately, until Internet security is placed front and center the cybercrime war and resulting economic damage it has costs worldwide, our lively hoods remain in bondage to those hoping to benefit off our freedoms.

It was fortunate the Twitter hack of Yingluck's personal account did not contain venomous links to phishing scams or poisonous downloads. But stay tuned. If you have not yet properly secured your intellectual property, you might as well hand over the key or access to a hacker or cybercriminal anxious to fatten his wallet and bank account. A nasty little Trojan could easily sneak inside and work quietly in the background while you work stealing stored passwords or key financial data being entered into a secure web based form. The only way to ensure you have no 'secret' visitors is by doing a scan using a 'reputable' anti-malware scanning tool. Unfortunately, some of the 'free online tools' circulating the Web are actually rogueware that deceptively say one thing and do another, for instance, opening the backdoor wide enough so a hacker gains remote access.

If your anti-malware tool reveals viruses or trojans, use aggressive methods to remove them. Because malware is known to use rootkit technology to mask or hide infectious files in sensitive areas, i.e. Windows Registry, kernel, etc., make sure your anti-malware tool has an anti-rootkit component to counter combative measures by malicious programs.