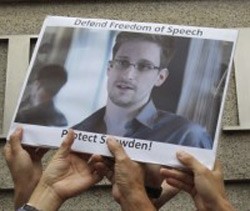 With each and every day, we learn something new about what is circulating in the mind of infamous NSA whistleblower Edward Snowden. In a recent interview with Snowden and Germany's Der Spiegel Magazine while he was still in Hawaii, Snowden spilled some surprising details about Stuxnet virus. He claimed that Stuxnet virus, used in a 2010 Iranian nuclear facilities attack, was written by together by the NSA and Israel.

Such an allegation has many heads spinning from the USA to Israel. The Stuxnet virus was a serious force found to have attacked an Iranian Nuclear plant back in 2010. At the time, no one really knew who created it and to this day there has not been a 100% certain determination made.

Stuxnet utilized aggressive techniques to target computers located in nuclear plans and was eventually dubbed the world's most sophisticated malware ever. Rootkit functionalities are also a part of the Stuxnet's game for infecting systems and keeping them infected without alerting authorities.

Eric Snowden has been at the top of many recent news stories who is believed to harbor a plethora of sensitive information, which is slowly leaking out into the open as of late. The NSA and the US government in general have been put on their heels not knowing the latest espionage operations information to be spilled by Snowden. With the idea of the NSA and Israel creating the Stuxnet worm out in the open will cause the launch of other investigations into the matter.

There have been other stories related to Snowden's new-found claim. The New York Times once published a piece about a year ago, hinting around that Stuxnet was a US-Israel joint operation while the US Department of Justice launched an investigation at the time to discover who was behind the information leak.

We are not the ones to be conspiracy theorists; however, we know how potent the Stuxnet virus was and still can be. Until there is a new confirmed revelation about the creation or Stuxnet, we will be on the sidelines to receive the first kick-off of any newly leaked information.