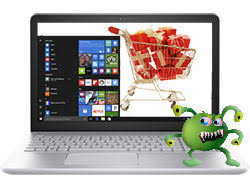 Computer malware infections jumped 123% from Black Friday through Cyber Monday. That's according to data released by Enigma Software Group (ESG), makers of the anti-malware software SpyHunter. ESG looked at infections reported on our SpyHunter anti-malware software installed on computers throughout the United States and compared those infections to the average number of infections detected in the month leading up to the holiday shopping weekend. ESG found a 123.65% spike.

"We believe a big part of the jump in infections is directly related to online holiday shopping," said ESG spokesperson Ryan Gerding. "First, any time there are more people engaging in more activity online, infections will go up. Millions of Americans spent more time shopping online this weekend than they normally would. Second, we believe malware makers are taking advantage of people's online habits to trick them into clicking on links that will cause infections. Sophisticated phishing attacks appear to be particularly strong this season."

ESG also looked at malware infection rates in several large cities over the four days between Black Friday and Cyber Monday. Charlotte had the largest spike in infections with a whopping 316% increase. Followed by Detroit, which had a 275% increase; New York with a 237% increase; and Salt Lake City with a 212% increase. A full list of the 40 major cities with the highest infection spike is below.