Hackers Steal $3 Million Worth Of Bitcoin From Cashaa Exchange 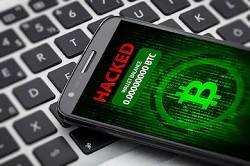 Cybercriminals have recently managed to compromise UK-based cryptocurrency exchange Cashaa, stealing more than $3 million worth of Bitcoin. In response to the theft of 336 Bitcoin, the exchange halted all crypto-related transactions for 24 hours after the attack.

The company has stated that no prima facia users have been impacted by the theft, in which hackers managed to compromise one of the exchange's Blockchain.info digital wallets. Cashaa's founder and CEO, Kumar Gaurav, told Cointelegraph: "We are still investigating the damage caused by the incident and suspend all the withdrawals for 24 hours. We have called the board meeting to decide whether the company will bear all the losses."

Gaurav first explained that the breach occurred on July 10, after hackers had likely planted malware onto a system that was used to facilitate exchange transfers, such as withdrawals. The malware was used to notify the hackers when a company employee logged into an account so that the hackers could transfer the funds from it to their own bitcoin wallets. As it later turned out, a total of 8 of Cashaa's Bitcoin wallets were affected, and the attack continued on July 11 as well.

The company believes that the attack was carried out by hackers based in East Delhi, India. Acting on this, the company has filed a cybercrime report with the Delhi crime bureau, with identification number 20807200031555, under the cryptocurrency crime category.

Cashaa has also taken steps in an effort to stop the cybercrooks from cashing in on their crime, by preventing them from trading the cryptocurrency on other exchanges. Cashaa posted the Bitcoin address of the hackers on Twitter, hoping that a group effort could track and block the movement of the illegally acquired cryptocurrency. Zebpay, Bitbns, WazirX, and CoinDCX are some of the exchanges that have pledged to work with Cashaa on the matter.

Nischal Shetty, the founder and CEO of WazirX, told Cointelegraph that: "we will help Cashaa in every way and will also work on setting certain security standards for trading." Cashaa's Guarav also commented: "Everyone working in the crypto industry has to work very hard to bring the same level of security which currently an average person has when dealing with a bank account. As of today, hackers are very confident to hack crypto addresses and move it through exchanges that are facilitating such laundering through their systems. Exchanges like these must be shut down and owners of these exchanges should be charged with money laundering facilitation crime."