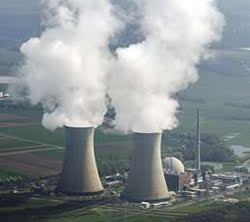 Today seems to be a huge coincidence as it not only marks the 30th anniversary of the infamous Chernobyl Nuclear disaster, but today is the day when malware leads to the shutdown of the Gundremmingen nuclear power plant in Germany.

At one time, earlier this year, Ukraine suffered a massive power outage that left several hundreds of thousands of homes and business in the Ivano-Frankivsk region were left without power. The cause of the massive power outage was later found to be the result of a cyberattack. It has been known for many years that power grids were soft targets for cybercrooks and malware could be utilized in a way to bring down power plants and leave regions around the world without electricity for hours to nearly days.

According to a press release issued by Gundremmingen power plant officials, malware was found on the facilities Block B IT network that oversees the fuel handling system. Officials verified that the attacked system was not connected to the Internet pointing to the idea of someone internally bringing the malware to the system. At no time did the malware effect ICS/SCADA equipment, which interacts directly with nuclear fuel. However, the malware did affect the computer IT systems, which is thought to have been supplied by accident through an infected USB thumb drive from an unknown source.

The underlying coincidence of the situations brings us to the fact that April 26, 2016, marks the 30th anniversary to the Chernobyl nuclear power plant disaster. It is also prudent to mention that the Gundremmingen power plant is slated to shut down permanently in 2021 and those opposing the decision are actively protesting to shut down the nuclear reactors before the looming deadline.

We believe that the breaking news of the Gundremmingen power plant getting shuttered due to malware is more of a headline due to the Chernobyl Disaster anniversary taking place this week. As far as the reasons to how and why malware was slipped onto IT systems at the plant, researchers and experts cannot conclude with a 100% certainty.

What the recent malware on IT systems at Gundremmingen power plant reveal to everyone is the elephant in the room being the threat to power grids around the world by malware and cyberattacks. The threat is very real, and even though Chernobyl was decades before the threat of cyberwarfair, it sparks a serious debate to be had with the current state and vulnerability of our power grids across each nation.

Currently, the Gundremmingen power plant is still offline. The state of the power plant may transpire at a later time as this information is breaking news at the time of our report.