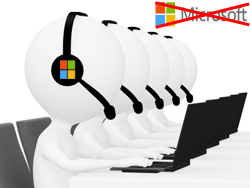 Fake phone calls from crooks on the other end claiming to be a support team from a well-known entity is an increasing pandemic, which has claimed an alarming rate of victims in the recent weeks.

There have been a large number of phone calls received by computer users in various countries from people who claim to be Microsoft technicians calling from a 'Support Team'. Most of these so-called techs often have poor English or fail to be specific about the purpose of their phone call. Most times, the crooks will generalize information and claim that they have detected some errors on a computer and have called as a response to these supposed notifications.

The goal of these crooks on the other end of phone calls claiming to be from a Microsoft Support Team is to establish a remote connection with a computer and later compromise personal information through the use of spyware and keylogger software. The main objective of these hackers will ultimately end up obtaining logins and passwords to online accounts where they could eventually steal the identity of the victim.

It was just a couple years ago that the Better Business Bureau was warning computer users of an aggressive Microsoft Phishing scam where victims were duped by calls from hackers who posed as a tech from a Microsoft Security Center. Unfortunately, these stories are in abundance and have only gotten worse. There have even been cases where fake call centers set up shop for hackers to trick computer users in abundant numbers.

The most recent rash of fake callers has claimed to be from Microsoft Support Team, sometimes even giving the victim a fake identification number just to further make claim to them being a trusted source. In some cases, the fake tech will ask that the PC user install software, so they are able to create a remote session to supposedly fix their computer. These unsolicited calls have proven to be very effective and preying on those who lack an abundant amount of technical-know-how when it comes to their home computer and the Internet.

Microsoft, among other trusted sources, have warned computer users recently of this scam and advised computer users to treat calls claiming to be from some technical support team with the utmost skepticism. If such a phone call is suspected in any way to be a fraud, you should hang up immediately. Additionally, it should be known that companies such as Microsoft would never make such unsolicited calls to anyone for the purpose of asking personal information and obtaining remote session access to one's computer. It is also highly suggestive that computer users always utilize legitimate security software to scan, detect and remove any malware that may be lurking on their system that may aid in a hacker's effort to make and succeed with an unsolicited phone call scam.

Comments (63)
By GoldSparrow in Computer Security
Translate To: Português