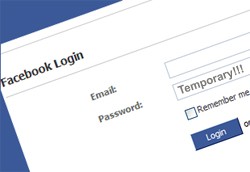 Computers with malware or password-stealing keylogging software is mounting to unprecedented numbers. With 48% of 22 million scanned computers infected with malware in Q3 of 2009, according to a 'Phishing Activity Trends Report', Facebook goal is to protect those users who may have filed to protect themselves. Keylogging software is a type of malware that usually goes undetected while it records keystrokes potentially allowing a hacker to obtain a users' password to an online account such as Facebook or a banking login.

Will you use the 'temporary password' feature? In the past, what situations were you involved in that this feature would have come in handy?