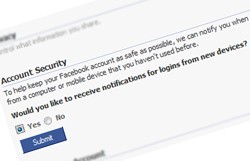 Rising security concerns and several users leaving Facebook over privacy issues has sparked Facebook to implement a security measure that many of its 400 million users could easily relate to. Users are now able to identify certain "approved" computers that are allowed to access their Facebook accounts. This feature is prevalent on a large number of banking login websites. Simply put, when this feature is enabled, a user is not allowed to log into their account on an unapproved computer or mobile device unless they correctly answer a security question. In return, this should help keep hackers and unauthorized people from accessing your personal information, right?

A Facebook engineer, Lev Popov, wrote on a company blog post that "We're confident that these new tools and systems will do a lot to prevent unauthorized logins and the nuisance they can cause," and then he continued to explain that "As always, though, the first line of defense is you. We need you to help by practicing safe behavior on Facebook and wherever you go online."

Although this new feature must be activated by the Facebook user, it is a major step in the right direction for Facebook in terms of improving privacy. Once again, users are forced to make changes to their settings on their own. Why doesn't Facebook implement changes that "improve" a users protection or privacy? For that reason, this new feature has drawn massive skepticism because it is not activated by default.

Several privacy settings within Facebook can be manually changed to secure a user's account but many of these settings are not activated by default. Many have questioned whether Faceboook should have made its new privacy setting active by default instead of making it "opt-in".

Facebook needs to better educate their users on their new security features; otherwise, it is just like making it legal for people to drive around without wearing a seatbelt, the "protection" is available but no one uses it because they are never forced to or made aware of its benefits.

There is also the fact that this new security feature designed to limit login access similar to that of a banking website, does not address the issues most users have been complaining about. Facebook users are still confronted by privacy issues that put their personal information at risk. For example, people can utilize search engines or Facebook's Graph API search query to find users' information that is otherwise private via the Facebook service.

Sure, the new security feature will keep hackers from accessing your actual Facebook account but it does not help limit the online availability of your personal information posted on your Facebook profile. If Facebook really wants to make their service more like a banking website, they should make it a default setting to limit any personal information from leaking onto the internet. Have you ever seen anyone's bank account balance searchable on Google or a back-end API system?

Did you know about this new Facebook security feature that requires you to answer a security question on a computer or mobile device that has not been approved by you? Have you enabled it yet? If not, you can easily do so by going to the "Account" menu and then select "Account Settings", scroll down to "Account Security" and then at the bottom of the page click the link that says "Change". When the site asks, "Would you like to receive notifications for logins from new devices?", click "Yes."