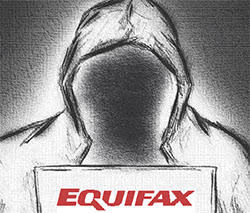 Equifax, known to be one of the major three consumer credit report agencies who collect credit data on millions of American consumers, reportedly succumbed to a massive cyberattack potentially affecting 143 million customers.

What is known as a massive data breach within Equifax may have allowed cybercrooks to gain access to American consumer credit data within the agency, which may account for social security numbers, names, addresses, and other personal data that could lead to an endless disarray of Identity Theft cases.

The Atlanta, GA-based credit agency, along with security consultants, says that criminals gained access to specific files within the company's system dating from May 2017 to July 2017. According to the initial investigation into the breach, access to the data was due to an exploitation of a weak point in the website software. Cybercrooks were able to gain access to scour data belonging to just over 200,000 consumers, in addition to documents with personal information that was used in credit disputes for about 182,000 people. In all, according to Equifax, there is no evidence pointing to unauthorized access to main consumer or commercial credit reporting databases.

As it turns out, the potential severity of the Equifax data breach has yet to be seen. With such an unfortunate case of breaching data in one of the largest credit reporting agencies around, Equifax has taken measures to help consumers determine if their data was at risk. In doing so, Equifax has setup the www.equifaxsecurity2017.com website for consumers to utilize to ensure the protection of their personal data ultimately verifying if it was compromised in the breach. However, use of the site has demonstrated that consumers don't necessarily receive a confirmation of whether or not their data was breached. Instead, the site provides an enrollment date for free credit protection services to monitor their credit and accounts.

John Ulzheimer, a consumer credit expert who worked at Equifax in the 1990's, said to the New York Times about to the data breach, "It's like locking one of three doors in your house and leaving the other two unlocked." He went on to say that "you're hoping the thief stumbles on the locked door." Ulzheimer added that the Equifax's offer on one year of free protection falls short of what consumers need mostly because hackers who pilfer the data of an agency like Equifax will usually buy and sell such data at later dates.

Data breaches have become more commonplace in today's technologically-focused world. Even with all of the protection measures put in place, you can be assured that cybercrooks have found a method for infiltrating institutions that harbor massive amounts of consumer data. Equifax just so happened to be the next target due to a discovered vulnerability, which is usually the case in most modern-day data breaches. Where there is a vulnerability, there is a target with a massive bullseye. Hackers are sure never to miss a large target.

Cybersecurity has been an ongoing agenda that the US government has put on their list of tasks to reinforce. The question about whether Congress needs to rethink their data protection policies has arisen once again due to the recent Equifax data breach. Fundamentally, governments have an obligation to help protect consumer data even if companies like Equifax have stumbled upon in placing the proper security infrastructure. No matter, hackers will find a way to infiltrate entities that show a sliver of vulnerability. New crafty hackers have emerged to utilize aggressive and evolved malware to attack some of the most "secure" servers around the world. We must all do our part of staying vigilant and educated on cybersecurity matters at all times. Who knows, it could mean the difference of your life in ruins or a life full of rainbows and butterflies.