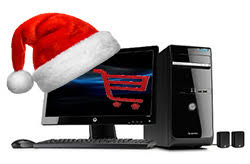 Malware infections in the US jumped 76% on Cyber Monday, a sign that malware makers are taking advantage of millions of shoppers going online for holiday deals. That's according to data released today by ESG, makers of the SpyHunter anti-malware software. Our experts analyzed hundreds of thousands of infection reports from computers across the US that have SpyHunter installed. We compared the average number of daily infections in the month leading up to Thanksgiving with the number of infections on Thanksgiving Day, Black Friday, Saturday and Sunday, and Cyber Monday. Our key findings are below.

Surprisingly, it's not just the time around Cyber Monday when malware infections spike. Our data show that December is routinely the month with the most number of infections each year.

"The holiday shopping season is one of the busiest times of year for the cyber crooks who spread malware," said Patrick Morganelli, Senior VP of Technology at Enigma Software. "They know lots of people will be online looking for deals, and will be vulnerable."

It is inevitable that millions of Americans will take to the Internet to find the best deals for the holiday season. History teaches us a stern lesson to expect the worst in the upcoming season as it has yet again this year.

Malicious Techniques Used by Cybercrooks During the Holiday Shopping Season

Here are some of the most common ways that cybercrooks use the holiday shopping season to target computers for malware infections:

"These crooks know that people are looking for good deals, and are most likely in a hurry when checking emails and doing Google searches," Morganelli says. "And the infections they are creating are more diabolical than ever."

Malware infections today are far more than the simple nuisances of that past that slowed down your computer. Some of the more common infections today can steal personal information, access your contacts and important files, and in some cases literally hold your computer hostage until you pay a ransom to unlock it.

Below is a list of the largest cities in the U.S. that we saw a spike in malware infections this year compared to Cyber Monday last year.

The ESG research team offer these tips to help protect against malware infections during the holiday season:

With every holiday season comes a bout of criminals looking to capitalize on vulnerable shoppers through sneaky tactics launched over the Internet. Additionally, every holiday season brings about new record numbers of victimized online shoppers. The best approach to protecting yourself this holiday season is to take proactive measures and heed to the warnings to avoid dealing with the serious repercussions that can range from stealing money out of your banking account to identity theft. Don't let cybercrooks steal your joy this holiday season.