Chinese Hackers Continue to Target US Despite Anti-Spying Pact 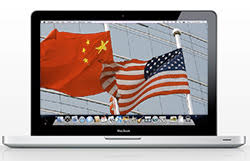 Regardless of laws and regulations put into place, hackers continue to be above the law in their actions as they have in China when it comes to targeting the United States.

In September of this year, the US and China entered into an anti-cyber-espionage agreement that takes new measures to address cyber spying vowing that neither country's government would conduct or knowingly support cyber theft of intellectual property on either side. While the anti-spying pact is adhered to by US and Chinese governments, Chinese hackers continue to wage war on US targets.

Chinese state-sponsored hacking groups are believed to be responsible for their continuation of attacking US entities. The US cyber-security vendor CrowdStrike Inc. has gathered information on attacks during a regular basis before and after the pact was put into place. Even so, just a day after the Pact was signed during an Obama-Xi presidential meeting, known Chinese-sponsored hackers attempted to infiltrate the network of a US company in the technology field.

As time progressed past the implementation of the Anti-Spying Pact, Chinese-sponsored hackers continue their attacks where CrowdStrike recorded several attempts on as many as five tech companies and two pharmaceutical firms all located in the US.

The rules are all being broken in the recent attacks by Chinese-sponsored hackers. The recent attacks were even purposely designed to extract intellectual property from the target's servers, going completely against the regulations defined in the Anti-Spying Pact.

Security experts and CrowdStrike both believe that the attacks will continue and potentially ramp up with relentless efforts with intrusive actions. Dmitri Alperovitch, CrowdStrike Co-Founder and CTO, asked the question, "So does this evidence of ongoing intrusions into the commercial sector from China indicate the failure of the U.S.-China cyber agreement?" At the same time he answered, "That depends on what we do about it, and how long the current situation persists."

Many different aggressive malware strands have been utilized in recent Chinese-sponsored hacker group attacks. Among the malware threats, some were tools used in the past by Chinese hackers that proved to work quite well to compromise web servers and then use SQL injections to gain access to a company's internal network.

Let it be known, governmental agreements between distant superpowers in the world can only do so much to bridle those who are hell-bent on causing utter destruction in the world we live in. Hackers, no matter their origin, are ruthless, and their lack of morality sometimes has a lasting and perpetuating effect throughout their hometown government. We can only hope that the relationships between the US and China are not diminished because a select group chooses to make matters difficult for everyone through their targeted hacking efforts.