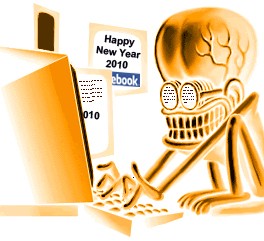 Among other computer security companies, we predict that social networking sites can expect more attention from cybercriminals in 2010. Social sites such as Facebook and Twitter will increasingly come under fire by hackers who indulge in cybercrime, according to security company reports.

Adobe products including Acrobat Reader and Flash will also be at risk. In addition, Google's Chrome OS will create another opportunity for malware writers to prey on users.

Dangerous and more sophisticated Trojans are expected to be used along with more distributed and resilient botnet infrastructures relying on peer-to-peer technologies so that hackers are able to follow the money in 2010. These malicious parasites will be used to conduct targeted attacks on social networks allowing the cybercrooks to make the New Year even more profitable. In addition to malware such as Koobface, which spreads among Facebook users' friends list, it's expected an increase in rogue Facebook applications.

Other predictions include more successes in the fight against all forms of cybercrime in 2010. Breaches will increase, especially against mid-sized businesses, Microsoft's legal efforts will pay off with at least one major arrest, and China will continue to be blamed for everything. The year 2010 may very well mark a time that governments around the world will greatly increase their efforts to do something about the malware threats that Internet users face.

One vital measure to follow in order to maintain your computer spyware-free this coming 2010 is to use a reliable anti-spyware program with up-to-date spyware definitions.

Have you taken the necessary precautionary measures to protect yourself in the new year? If so, what have you done to secure your computer?