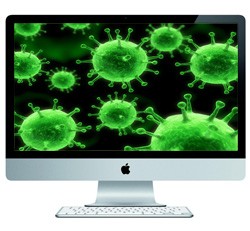 The growing numbers of Mac computer users not only need to worry about the recent emerging threats of OSX malaware, but they have something new to be worried about in the form of a new Trojan called Sabpab.

If you are the least bit tech savy and tend to stay abreast of the technology news, then you probably know Macs are the latest growing target for malware creators. The number of detected Mac malware threats is somewhat unprecedented with over 600,000 Mac computers infected with what appears to be a new botnet. Half of those infected Macs are in the U.S. with a large portion in the Cupertino, CA area, quite possibly compromising systems within Apple's own headquarters.

Macs have been known to be the 'safe choice' for those computer users who thought to avoid malware infections. Although Mac's are still relatively less susceptible to malware infections when compared directly to the PC population, there is no denying the malware threat for Macs growing exponentially in recent months.

The most recent emerging malware threat, the Sabpab Trojan, was found to spread through Microsoft Word documents where the Trojan exploits Java vulnerabilities. Researchers at Securelist were able to determine two variations of the Sabpab Trojan, one dubbed Backdoor.OSX.SabPub.a. Even various popular Mac news blogs, such as Cult of Mac, have pointed out the creation of two Trojan variants supposedly created back in February of this year.

Another well-known Mac malware threat, the Flashback Trojan, has caused a major uproar with Mac users infecting over 140,000 systems just this year. The Flashback Trojan is an infection that is very similar to the Sabpab Trojan in that both take advantage of the same vulnerabilities, which are found within Java. Both infections do not require user interaction, which puts them in a category of being a serious threat.

Specifically, the Sabpab and Flashback Trojans are able to connect to a control server using HTTP and follow the instructions of remote hackers who have access to run commands, take screenshots and even download files. In a way, these Mac Trojans act somewhat like a botnet on a PC.

Being that a large number of Mac users fail to utilize antimalware software, about 75% of Macs, according to Betanews, the Mac is an easily accessible target for hackers and cybercrooks. As a comparison, about 90% of PC users are said to use some form of security software.

The video below reiterates how the latest security threat has infected over 600,000 Mac systems, mostly located in the United States.

Let this be a wakeup call for Mac users to take action now, rather than later, to secure their system running OSX with security software. Additionally, the same rules that we have given to PC users should apply to Mac users when it comes to safeguarding their system and using safe practices over the Internet.