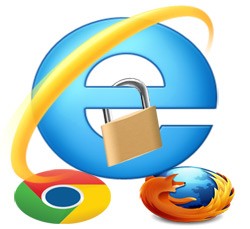 The Internet Explorer web browser has received much flak over many years for allowing malware to slip onto computers, and justifiably so due to the high infection rates for systems using older versions of Internet Explorer. To our surprise, according to NSS Lab's recent findings in a controlled environment study, the new Internet Explorer 10 trumps Mozilla Firefox and Google Chrome when it comes to blocking malware downloads.

According to an independent study done by NSS Labs, Internet Explorer 10 users are far less likely to succumb to malware infections while browsing the internet when compared to users of Safari, Chrome, Firefox and Opera.

As with any new version of software, it boasts new innovative features. When it comes to Internet Explorer, we have seen ups and downs in their iterations where the majority of its past has always been lackadaisical at blocking malware. In the most recent version of Internet Explorer, version 10, it appears to boast by far the best web malware blocking agents out of all popularized web browser applications.

The study conducted by ISS Labs consisted of a full month-long test where the latest versions of web browsers were put to the test against 754 samples of malware. Besting all browsers as demonstrated in the chart in Figure 1 below, Internet Explorer 10 had a block rate of 99.96% while Google Chrome came in second place at a distant 83.16% followed by a poorly rated 10% on average for Firefox and Safari. Opera, the least likely browser to be used by web surfers, faired even worst with a block rate at 1.87%. 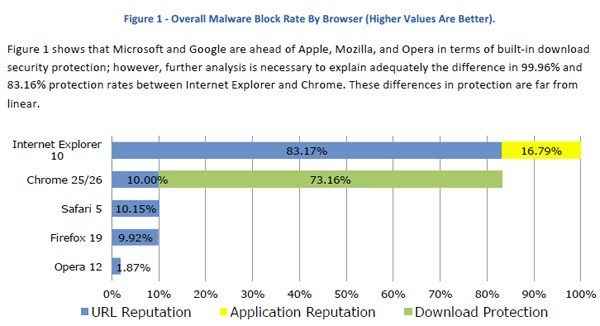 Delving deeper into how NSS Labs came to their conclusion of Internet Explorer 10 shattering the competition when it comes to detecting and blocking malware, we find that IE10 is running away with the crown due to being equipped with Microsoft's Application Reputation technology. With such technology, Internet Explorer 10 is able to use a variety of sources to set a threshold of how trustworthy an application appears to be. Though Chrome and IE10 employ CAMP (content agnostic malware protection), IE10 takes malware protection a step further piggybacking on Microsoft's Application Reputation technology and its many years of growing development.

Google Chrome, only coming in second place behind IE10 in NSS Lab's study for malware protection, puts the majority of its ability to block malicious downloads in its Download Protection technology. Without this technology, Chrome was suspected in NSS Lab's to have just a 10% block rate. Stripping Google Chrome of this pertinent part of its security infrastructure would basically put Chrome in the same boat as Firefox and Safari, solely relying on Google's Safe Browsing API, which they all utilize.

There is no doubt that Internet Explorer 10 has broken the chains that once held it back from providing a relatively secure environment for web surfers. Now the task would be to instill its new on-top-of-security ability in the minds of naysayers so that old perception and reputation for allowing an abundance of malware to slip through the radar will cease to be so prevalent.