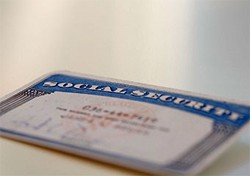 Identity theft is a fast growing epidemic that affects over 10 million people every year in the United States alone. Just about every minute, there are almost 20 people in the world that are in some way affected by identity theft and now it is trickling down to kids in a new ID theft scam.

The use of someone's identity to establish credit accounts is nothing new by any stretch. However, the use of kids' social security numbers in this manor is and it could pose a serious threat to the nation's credit system.

Obtaining credit through fraud can cause serious issues. "If people are obtaining enough credit by fraud, we're back to another financial collapse," said Linda Marshall, an assistant U.S. attorney in Kansas City. "We tend to talk about it as the next wave."

To further complicate matters, currently there is no way of finding out how widespread this type of fraud is. Usually many of the companies that seek ID theft through use of children's social security numbers are 'here today gone tomorrow' type businesses. They do not stick around long enough to get caught. Not to mention, who really thinks to check their child's credit history or credit score?

One major flaw in the system that allows thieves to obtain kids' social security numbers is the amount of information that is publicly available. Public databases can be accessed by online companies. It first starts with these companies where the data is sold off more-than-likely to the highest bidder or for a few hundred dollars up to several thousands.

Young children's credit history is basically none existent and by using their untouched credit, thieves are able to setup a fresh line of credit and build it up quickly by linking to someone else's credit file. This process is called 'piggybacking' and it can yield very high credit scores if done correctly which gives the crook a high availability for the amount of credit he/she can run up. The crook has no risks involved because once the credit is ran up they can easily default on the loan and suffer no consequences. This whole process can go on for years at a time.

This new scam is much different from ones in the past that used social security numbers from dead people. The Social Security Administration can simply run a number against their 'death index'. Credit is everything when you need to make a big purchase or take out a loan. Ever since the credit crunch and economical meltdown in 2008 it is harder than ever to secure a loan. Thieves know this and have taken alternative measures in the form of seeking kids' social security numbers to secure extra credit and loans.

Have you ever become a victim of identity theft in the past? Do you utilize any type of credit monitoring or protection service? After reading this, do you now fear that your child's social security could be at risk of being used by a crook?