How Small Business Owners Can Improve Cybersecurity on Their Apple Devices 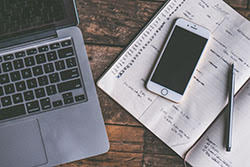 It is largely believed that Apple devices, and Mac computers especially, are far less likely to experience a breach or a cyber attack of any kind, compared to Windows operated systems. Some even go as far as to claim that Mac computers are completely fool proof regarding cybersecurity. This, as we will come to understand, is not only wrong but also dangerous as it is likely to lead Apple users into a false sense of security which may end up costing them dearly. In fact, some security sources claim that in the period between 2016 and 2017 Mac malware had an over 270% increase. Small businesses are particularly vulnerable as more often than not there is not an IT support department or even an IT specialist to take care of the security. Furthermore, according to a study conducted by Manta Media Inc. about 87% of small business owners do not think that their business could experience a data breach. Thus, cybersecurity often becomes somewhat overlooked by small business owners with only 2% of them having developed a cybersecurity plan, as stated by CNBC/SurveyMonkey Small Business Survey.

The Importance of Backups for Cybersecurity

This neglect has resulted in some worrying statistics. A study ran by GFI Software found out that approximately 53% of small businesses do not do daily backups of their data. This shortfall has most certainly contributed to the alarming numbers provided by Security Standards Council showing that 60% of small companies that have suffered a security breach go bankrupt within the next six months. The daunting stats go even higher according to a study by PricewaterhouseCoopers which claims that when it comes to a major data loss reaching the overwhelming 70% of affected businesses close doors within 12 months of the attack. In 2017 Ponemon Institute conducted a study which found out that the cost of dealing with the consequences of a data breach may vary, but the global average that companies spend on recovering from data breaches is $3.62 million.

A responsible business owner cannot afford to overlook the importance of backups. The regular backups would allow you to have all your information stored and in case of a breach or any sort of data loss you can find the backup and restore the information. If you want to go a step further, you can employ redundant backups. This is a more complex, but for some businesses crucial method of keeping their data safe. A redundant backup is basically a second real-time variant of all your information. In case of an emergency with the original variant the redundant backup would immediately kick in, and your servers will not go offline. Also, remember to regularly check if the backups are up to date so that you do not lose any vital data. As a Mac user, you can use Apple's built-in backup application called Time Machine to protect your data. This app was introduced in 2007 with the Mac OS X Leopard and is a component of every newer version of the OS. The Time Machine would create weekly backup versions of all data that is more than one month old, it would daily backup files that have been created or modified in the past thirty days, and hourly backup the data that has emerged in the past 24 hours.

How to Create Strong Passwords

Another major vulnerability could be weak passwords. In fact, a Verizon Business Data Breach Investigations Report states that 97% of the security breaches are due to three main reasons one of which is weak passwords, the other two being the lack of system hardening of the computer and outdated software. You may find it much more convenient to have a short and easy password that you will remember at all times but is it really worth it potentially losing your business due to mere comfort?

Many users not only like their passwords short and sweet but also use the same password on each of their accounts. If you want your business to stay secure, you will have to wave goodbye to these old habits. According to the Ponemon Institute’s State of SMB Cybersecurity report, 59% of small business owners do not observe or take into account their employees' password practices. You may need to establish a password policy with your employees and enforce it with an iron fist because the same Ponemon Institute report states that 65% of the small businesses that do have a password policy fail to enforce it strictly. There is no place for dillydallying when it comes to security. A strong password must include lower and upper case letters, symbols, numbers, and be no less than ten characters long. If you are a Mac user, you already know that Safari would suggest a strong password every time you are creating an account. We recommend using these passwords as they cover all the bases for a reliable password. Furthermore, you may need to request your employees to change their passwords on a regular basis set by you. If you find these rules to be too demanding and want to make this process more clear-cut, you may want to use password management software. The good news is that if you use a Mac, you can utilize the Apple Keychain. This application would allow you to keep all your passwords safe in one place, so you do not need to memorize them. All you need to remember is one single password which would unlock the Keychain application.

The Importance of Keeping All Your Apps Up-To-Date

Outdated software could be extremely dangerous for a business. Applications that are not up to date may serve as a hole in your security which individuals with malicious intent could easily exploit. Small businesses are particularly vulnerable as they tend to have a shared office network meaning all the devices are connected together and often if a hacker gains access to the network they could cause a lot of damage to your business. It does not only come down to stealing your data. Another major threat to small businesses is ransomware attacks which have been on the rise the past several years. Hackers could also hijack your computers and use them for DDOS (distributed denial of service) without your knowledge. They might also use your company's computers to mine cryptocurrency which is likely to severely shorten the lifespan of the machines. These are just some of the more common threats out there, but shady individuals who want to scam you out of your hard earned cash are remarkably inventive and never take a day off.

It is understandable why people tend to neglect keeping all their software up-to-date. After all, we all have a tonne of applications on our devices and keeping track and updating all of them could be a very tedious task. However, you cannot overlook the threat that known vulnerabilities in outdated software are. Especially if you are running a business. The good news is that there are many applications which would help you keep your software up-to-date. These apps will detect all software currently installed on your computer, and automatically check whether any of the programs you use are in need of an update. Usually, these software suites can be configured to check for updates on regular intervals, as well as to automatically apply the pending updates, therefore ensuring that all software will be up-to-date.

Threats in the Mac AppStore

There is one threat in particular which is very specific to Mac users, and this is the PUPs (Potentially Unwanted Programs) which have weaseled their way into the Mac AppStore while Apple seems to be struggling to prevent this. The applications that are most likely to be fraudulent are ironically most often the ones that market themselves as anti-malware apps so you have to be extra vigilant downloading any software of this class from the Mac AppStore.

According to a Norton Cyber Security Report cybercrooks managed to snitch about 172 billion dollars in 2017 alone. There are some recommended practices that could help you boost your security. If you are a Mac user, you should certainly take advantage of the FileVault app which is built within the OS X Lion and every version after this. This application employs an XTS-AES-128 encryption algorithm which would lock all your data securely and will provide you with a 256-bit decryption key. FileVault will help you keep your information safe from anyone who is not authorized to see it. Any intruders will only be able to see scrambled data which could only be read if they had the decryption key. Furthermore, if you want to ensure that no one will be able to spy on your network traffic, then investing in a modern VPN (virtual private network) solution is certainly something to look into. Most VPN services are at a very affordable price and could spare you a lot of headache in the future.

If you have been unfortunate enough to have already suffered a cyber attack you must definitely analyze why it happened and how it could have been prevented to ensure it never happens again. However, as always, prevention is the best way to approach cybersecurity and the tips in this article will certainly go a long way towards improving your business's safety online.