Half of Live Sports Streaming Site's Advertisements Found to be Malicious 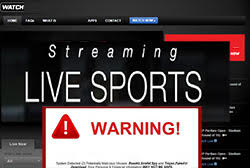 Computer security researchers from the KU Leuven University in Leuven, Belgium, and the Stony Brook University in New York, have encountered a plethora of malicious advertisements when surfing live sports streaming sites. In their findings, it was revealed that there is a 50% chance of encountering malicious overlay ads when attempting to watch live streams of sports through malicious sports streaming sites.

The research conducted by both KU Leuven University and the Stony Brook University included about 23,000 free live streaming sites that offer video streams of sports. The free streaming sites were spread across 5,600 domains where about a 1/5th of them were among the top 100,000 sites in Alexa rankings during the tests, making them relatively popular and heavy traffic sites.

The test processes took place through a semi-automated process where the researchers made about 850,000 visits to the sites to load live video streams where they were required to view several overlay advertisement displays before streaming commenced. The traffic was logged as well as the many overlay ads that would pop-up before watching the video streams.

During the tests performed by attempting to watch many live video streams on malicious sports streaming sites, researchers from the Universities would encounter malicious activity in roughly half of the ads displayed. Many of the advertisements were clever in the way that they bypassed ad blockers and copied the graphic displays of well-known sports live streaming sites.

Use of web browsers, such as Google Chrome and Safari, allowed the most malicious overlay ads to pass through. After digging deeper into the malicious ads, the researchers found that many of them were running scripts that detected ad blocking software or the type of web browser used to display the site.

It's rather obvious that live streaming sports sites are popular entities over the Internet. After all, with the number of cable TV cutters growing by the day, the Internet is being flooded with those seeking live streams of entertainment and sporting events. We're not surprised to see that cybercrooks are taking to the Internet to form malicious live sports streaming sites that deliver advertisements that may install malware on computers accessing the site.

Unfortunately, we're only in the beginning stages of seeing a growing number of malicious ads to flood sites that provide live video streaming content. Computer users are warned to be cautious when searching for live streaming content as much of it has a malicious agenda due to the steadily rising volume of those looking to stream content over the Internet. The next time you are presented with an overlay advertisement of some type before you can view live streaming video, think twice before clicking – it could be a malicious ad ready to install malware on your system.