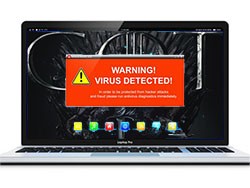 The recent release of the final season of popular HBO Series "Game of Thrones" did not just disappoint many of its fans. Some of those fans also found unwanted malicious software on their home computers. A recent report from security experts with Kaspersky Lab announced that users seeking to download the fantasy TV show's latest episodes got hit by malware instead.

Each episode's premiere was accompanied by spikes in attacks worldwide, with the attacks varying in intensity. The peak happened with the release of episode three, with attacks spiking to 3000 for a single day, with 1500 users attacked according to Kaspersky's data. Each episode's release was followed by extended attacks with malware-laden files that were posing as episodes from the popular show. The attacks decreased in intensity around the fifth episode and reached their lowest values after the season was over.

Hundreds of attacks per day

Throughout the season's release, attacks using malware disguised as an episode of "Game of Thrones" averages 300-400 per day, peaking to over a thousand in the couple of days following the release of each new episode. Similar malicious activity was observed back when Marvel's "Avengers: Endgame" movie was hitting cinemas.

In addition to fake video file downloads, attacks were also carried out through websites that offered fake streaming services. Anyone naive enough to believe a paid streaming service would be legally offered for free in another location was lured into feeding private information in the fake streaming websites. Given the similarities between the attacks during the premieres of popular movies and TV series, Kaspersky even believes there is a single group of bad actors behind these attacks, targeting anyone who is looking for downloads in strange locations.