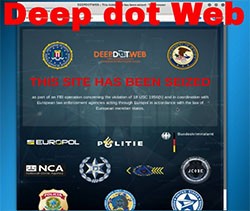 Last month, the FBI conducted several arrests of people convicted of generating affiliate commissions by referring traffic to illegal websites. The arrests were the result of an international operation in which the FBI worked together with Europol and the law enforcement agencies of Israel, Brazil, Germany, and the Netherlands  According to media releases, two of the arrested men are residents of Israel - a 34-year old resident of Ashdod and a 35-year old resident of Tel Aviv. Arrests have occurred in the other participating countries as well.

All arrested persons are accused of being involved in the establishment and management of a website called DeepDotWeb. The shady Internet portal acted as a directory for web pages running on the Tor network. Officially, these sites offered news related to the dark web, however, beneath the surface DeepDotWeb also served as a directory to illegal Internet marketplaces that sold malware, weapons, drugs, child pornography, and stolen data. The administrators of the dak web directory, supposedly, earned commissions through an affiliate marketing campaign. Exact details have not been revealed, however, it is likely that the suspects received a commission for each referred to criminal markets sale.

DeepDotWeb is not the first criminal online marketplace accessible through the Tor anonymizing network that law enforcement authorities take down in recent months. In April this year, in Germany and Finland, several people involved in the management of Valhalla and Wall Street Market have been arrested as well while their criminal websites have been cracked down. With over 30,000 listed products on site and operating since October 2013, Valhalla is considered the oldest marketplace on the dark web.