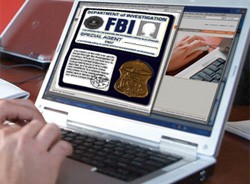 The FBI, with the assistance of international law enforcement agencies, have brought down two operations responsible for infecting over 1 million computer users worldwide with fake anti-virus applications.

Each and every day, we witness firsthand the latest creations of fake anti-virus and anti-spyware programs at the hands of vindictive hackers. At times it seems that these hackers' efforts are rather relentless and unwavering in every aspect due to the countless attempts made to market and sell these fake security apps, which are designed to primarily exploit computer users.

In an ongoing FBI and international cybercrime initiative to seek out and disrupt hacker organizations, Operation Trident Tribunal was born. This initiative not only includes the FBI and the U.S. Department of Justice, but it is compromised of authorities from many other countries such as Canada, Cyprus, France, Germany, Latvia, the Ukraine, Lithuania, The Netherlands, Romania and Sweden. Together, the authorities involved in Operation Trident Tribunal targeted specific sophisticated business enterprise. These organizations were believed to have the ability to steal millions and found to be associated with criminal gangs responsible for selling $72 million in fake Antivirus programs to over 960,000 computer users.

During the bust of two large criminal cyber gangs, authorities discovered that they were charging victims upwards of $129 for each fake AV product over the course of 3 years. As many as 5 banking accounts in Latvia were used to transmit money to the leaders of the cyber gangs.

To our surprise, some authorities from the Ukraine mentioned that the infamous Conficker worm was used to spread scareware from a recently busted cyber gang. The FBI's Operation Trident Tribunal makes no mention of the Conficker worm but remains to be an unforeseen circumstance in the bust.

Various members in the busted cyber gangs utilized malvertising (malicious online advertising) to spread the fake AV software. Reportedly, the victims infected computers suffered from frozen screens while being hit with multiple pop-up warnings forcing them into purchasing the cyber gangs' fraudulent AV programs. These characterizes sound all-too familiar to us from the rash of recent fake antivirus applications that we have run across

Could it be that the infamous Conficker worm is alive, thriving and once used by recently busted cyber gangs to spread fake Antivirus software? The ongoing investigation conducted by members of Operation Trident Tribunal, including the FBI, may turn up more startling and revealing facts about the busted cyber gang considering they have seized 40 computers and bank accounts. Until then, we will all rest a little easier knowing that two cyber gang operations were disrupted by authorities facing charges that could land them in jail for a very long time.