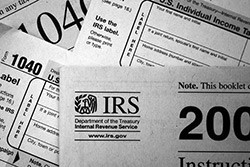 With technical knowledge and the information of the world readily at our fingertips, the things that attempt to make our lives easier sometimes end up making matters worse. Case in point, an unnamed cybermafia group utilized the "Get Transcript" app, which is supposed to make it easy to download IRS tax forms and other tasks for those who need the proper documentation in the event of applying for a mortgage or college financial aid, to download forms on over 100,000 individuals.

The attack, which was claimed to be from a sophisticated organized crime syndicate organization, used the IRS website to steal personal financial data on 104,000 taxpayers. In the process, the cybercrooks attempted to make away with downloads of forms for as many as 200,000 taxpayers but were only able to make away with half of that target.

The IRS has long been a target for cybercrooks, and the tax refunds of thousands of individual taxpayers is something that thieves yearn for every tax season.

This recent cyberattack was not an ordinary attack in the traditional retrospect of how hackers are able to make way with financial data. The IRS has found that the cybercriminals were able to use the Get Transcript service from plugging in personal data that was already stolen. That information ranges from Social Security numbers and addresses to birthdays and full names. The verification processes put in place for an extra level of security is where this information came in handy allowing the attackers to bypass security measures. In this task, it is believed that the crooks were looking to obtain additional information about taxpayers and potentially capture their tax refunds as payment for their thieving actions.

Experts believe that the potential fallout from this attack has yet to be seen. In fact, with the cybercrooks armed with data of over 100,000 taxpayers, they are free to pose as those individuals to later collect tax refund money or potentially take over identities to open accounts against their credit or access current banking accounts.

In the attempt to make IRS tax information easily available for taxpayers through the use of the "Get Transcript" service, a large door has been left open for attackers get in and wreak havoc. Apparently, as explained by many computer security experts, the attackers from this cybermafia group are highly educated and have the proper resources to take on facets of the IRS.

The "Get Transcript" service is widely popular and has been used to download 23 million transcripts in the past few months from the IRS for obtaining previous year tax and financial information. After the attack, the IRS cut off communication so the attackers could no longer utilize the sneaky methods to infiltrate taxpayer information. Additionally, the IRS is currently in the process of notifying the nearly 200,000 taxpayers who were potentially affected by the cyber-attack.

As you expect, the IRS law enforcement agencies are hot on the trails to hunt down the perpetrators responsible for this attack. The several clues gathered from the nature of the attack will hopefully assist with tracking down the cybermafia group who may initiate other attacks on government agencies.