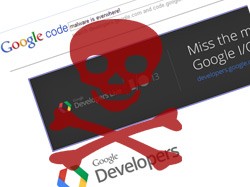 Cybercrooks are like little pesky bugs that crawl around the Internet sniffing out new victims by the minute while security experts attempt to spray them with a mild formulated insect killer fed through a sprinkler running 24/7. It isn't but every day that malicious creations make their way onto legitimate websites in an effort to distribute malware, such as in the case of hackers peddling abused Google Code in the latest findings of cybercriminal activity on the Internet.

Security experts have discovered where hackers are starting to host malware on Google Code, which is Google's official developer website. We suspect things have really gotten rotten on the Internet when hackers can infiltrate one of Google's entities when Google claims to be king of how all-things revolving around Internet search are run.

Surprisingly, it isn't all that rare to see instances of malware being spread through large trusted companies on the internet. Just a few months ago, Dropbox was found to have a fake Flash Player touted around to serve up a nasty malware cocktail that disabled the Windows UAC, Windows firewall and most installed antivirus applications. Basically, the same thing has taken place on Google Code where a fake Flash Player update is circulated to mask a dangerous piece of malware.

Google Code has been a place for developers to share their own creations to provide a solution to something they see needs an improvement in the technology and Internet world. Much like a file sharing site, Google Code gives access to users for downloading of certain code or applications. Security researchers believe that many file sharing sites, either ones designed specifically for developers or ones outright sharing software through the internet to anyone, are new-found targets for malware peddlers.

The idea of flooding file sharing sites with malware, sometimes masked by alleged legitimate applications or files, is as ancient as Napster, Kaaza or Bit Torrents. It is not until recently that hackers have found shortcuts and systematically sought-after ways to infiltrate sharing sites used primarily by developers.

The idea that a developer is always a "good" person is also a misnomer as many so-called "developers" easily fall into the category of cybercrooks. Remember, many hackers are washed-up developers who have discovered a path less traveled and easy to scam computer users for the purposes of money extortion or schemes that lead to a handsome payday in the end.

It is always in our best interest to use caution when we seek something desirable on the Internet through file sharing sites or exclusive developer networks. Malware is everyone and there is no shame in a cybercrook's game in spreading it.