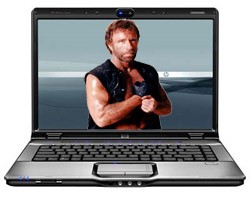 Have you changed to default password on your home router or DSL modem? If you have not, then you could become the next "karate-chopped" victim of the Chuck Norris Botnet.

Security researchers have discovered a botnet that spreads primarily through routers and DSL modems. The vulnerable routers and modems are ones that have not been properly configured with an original password leaving them open and vulnerable to this new botnet.

If you are at all familiar with the name Chuck Norris, then you know that he is a famous U.S. actor known for martial arts and films such as "Missing in Action" , "The Way of the Dragon" and the TV series "Walker, Texas Ranger". The Chuck Norris botnet gets its name from the actor because of its programmer's italian comment in the sources code: "in nome di Chuck Norris" which means "in the name of Chuck Norris". As to why such a comment was made, we think it could be because Chuck Norris, for the sake of all arguments, can be a vicious force to be reckoned with. We expect the Chuck Norris botnet to be just as "serious" as any character Chuck Norris has played in his career.

Millions of computers around the world have been infected by botnets and we believe the Chuck Norris botnet will be able to seek out different types of computers since it has the ability to mainly infect systems through routers and DSL modems. If a computer user has a router or DSL modem that still uses the default login and password, then it is a prime target for the Chuck Norris botnet. Once infected with the Chuck Norris botnet, a compromised system can be used to initiate DDoS (distributed denial of service) attacks over the internet on other computers. In addition, this new botnet can be used to change the DNS (Domain Name System) settings on an affected router which can easily lead users to malicious or phishing web pages.

The Chuck Norris botnet can be controlled remotely sometimes through IRC (Internet Relay Chat). The botnet can be defeated by a restart of the infected system's router. To eliminate the threat of Chuck Norris botnet, it is suggested that users use a strong password, update the routers firmware and enable the security features on the router or modem.

Comments (2)
By GoldSparrow in Computer Security
Translate To: Español Português