Ransomware threats have grown in abundance lately relishing a plethora of false allegations ranging from the local police authorities detecting distribution of illegal software to the viewing of child pornography. Most recently, we have taken notice to a specific ransomware threat, dubbed the German Federal Criminal Police (BKA) Ransomware, which has had instances where it actually displays child pornography images alongside of the common allegations.

In any instance, online pornography is an industry that is difficult to reckon with for as long as it is working in the legal realm. On the other hand, child pornography is something that is not tolerated in most countries and deemed to be illegal and morally disturbing to the general sane public. With just the idea of common ransomware threats claiming to have detected child porn on one's system, and then asking that a fine be paid for such activities, is only a tip of the malicious iceberg that the ship of common decency is about to run into. Actually taking the ransomware scheme a step further by purposely displaying a child pornographic image in the deceptive message (example below in figure 1.) is going a bit too far with exploitation, don't you think?

Figure 1. Example of German Federal Criminal Police (BKA) Ransomware message and 'foto' place-holder for where the pornographic image is displayed 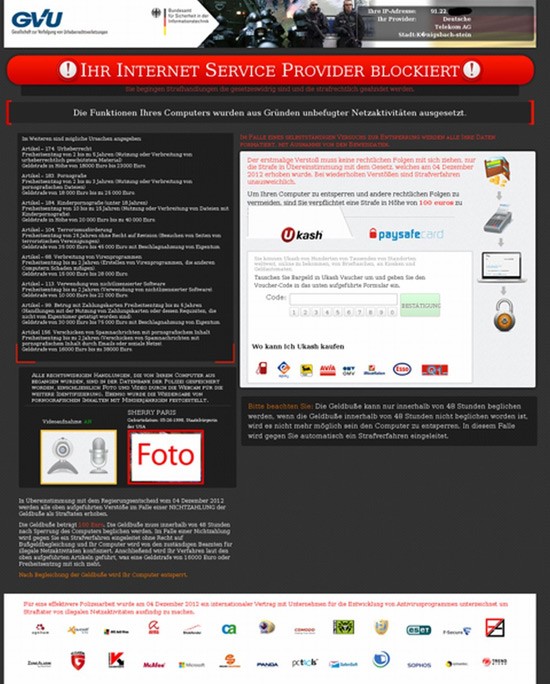 Aside from the pornographic image, the German Federal Criminal Police (BKA) Ransomware has the common characteristics of what we have become familiarized in ransomware. The BKA Ransomware message, from our perception, does not have anything out of the ordinary for a deceptive message that attempts to extort money from unsuspecting computer users, other than the fact of display a nude image of what appears to be a child.

Like popularized ransomware threats, such as FBI MoneyPak Ransomware, Ukash Virus and Police Central E-Crime Unit (PCEU) Ransomware, the German Federal Criminal Police Ransomware asks that computer users pay a hefty fine for their computer allegedly being used to distribute child pornography, infringing on copyright acts and performing other criminal activities. The German Federal Criminal Police Ransomware message will even go as far as to make a claim that the BKA and BSI will constitute the image as illegal possession of child pornography. It is almost like two traps in one if a victim considers the supposed ramifications of what they are being accused of.

By placing this virtual wrench into what security experts and analysts expect in new ransomware, the German Federal Criminal Police Ransomware could be a new face of what is to come of emerging ransomware. We will continually monitor new threats and advise as needed while we keep our anti-spyware resources updated to detect and remove these vicious threats.