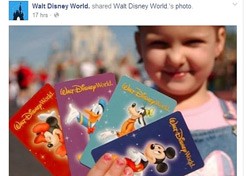 Astonishingly, it is nothing new to discover that cybercrooks have setup some fake page using a legitimate and well-known entity to trick computer users into getting something that seems too good to be true. In the latest scheme of things cyerbcrooks have created several fake Walt Disney World pages on Facebook that attempt to offer chances for winning tickets if they share and like some of the posts.

Facebook is a playground for cybercriminals and it does not take much effort on a criminal's part to setup a fake page offering enticing deals for computer users, which in reality spread an aggressive scam. One of the current scams involves fake Walt Disney World pages that claim to give you and 50 other people a chance to win an all-paid-for Florida Disney World vacation. The deal does sound rather interesting and could very well be something that Disney World offered at one point and time. Only thing, this deal requires that you share and like the post on Facebook, which will essentially spread the scam like a virus onto your friend's Facebook walls and news feed for others to follow suit.

The Walt Disney World Facebook page scam reads: "Good news were giving you and 50 other people a chance to win an all paid for Florida, Disney World vacation with passes to every park. Each winner will receive 4 tickets each for a date of your choice with $2,000 spending money. To enter just share & like this photo. (Comment to double your chances). Good luck, competition ends in 48 hours. Winners will be posted."

The reality behind this Walk Disney World vacation offer scam is that thousands of Facebook users are liked and shared amongst followers and friends while no one gets granted a free vacation to Disney World. The ultimate goal of the cybercrooks initiating this scam is the harvest as many likes as possible so the 'popular' page and later be re-purposed by its operators and sold to others on the underground market.

The plan of reselling popular Facebook pages that contain thousands of likes and shares is a commonality among the social networking giant. Legitimate companies have a hard enough time promoting their own Facebook page and gathering likes or follows so it is an attractive offer to some to just sell off a Facebook page that is already well-established containing thousands of likes.

Many times the reputation of popular companies or businesses is leveraged by scammers. Other companies exploited in this manner have ranged from BMW, Chevrolet and many other car manufacturers. It seems that car makers are an easy target, but the recent exploitation of Walt Disney World offering a chance to win a free vacation has shown much success for scammers. Facebook users are strongly urged to be cautious of liking or sharing pages or ones that claim they belong to a legitimate company. Liking such a page could be giving online scammers virtual ammunition to spread a vicious scam to your friends on Facebook.

Comments (2)
By GoldSparrow in Computer Security
Translate To: Português