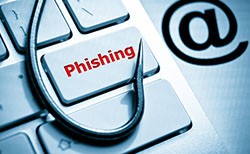 Renowned businesswoman, Shark Tank judge, and investor, Barbara Corcoran, has fallen victim to a phishing scam, which has reduced her bank account balances by $400 thousand. The fraud, which was executed via a bogus email, occurred after the gang in charge sent a fake invoice to Christine —Corcoran's bookkeeper — to transfer the money to a German company pretending to be involved with one of Corcoran's real estate investments. The attack comes six months after an unsuccessful targeted attack, although it is not clear whether both campaigns were carried out by one and the same group of cyber criminals.

The chain email sent to Christine looked every bit as genuine because it appeared to have been sent by Corcoran's assistant Emily. Apparently, the sender's email address mirrored Emily's except for one character, which makes it practically invisible to the naked eye at first sight. It contained instructions to wire the amount of $388,700.11 (from the attached invoice) to a bank account owned by the company going by the name of FFH Concept GmbH headquartered in Berlin. Here is a screenshot of the email: 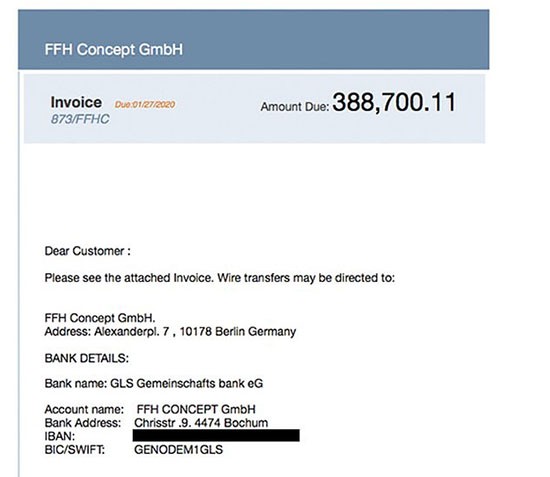 The wire transfer took place on Feb. 25, 2020. Yet, it was not until Christine reached Emily via her real email address that they became aware of the scam. The swift attack, it seems, originated from a Chinese-related cyber gang which may have unsuccessfully tried to do the same trick just six months ago. Back then, Corcoran had reportedly been on the brink of parting with a greater amount of money thanks to a similar undertaking.

Happy Ending: The NYC Real Estate Queen Got It All Back

Although the prospects of getting her money back initially looked bleak at best, Corcoran retrieved it all by a remarkable stroke of luck combined with impeccable timing. As soon as her team members had become aware of the scam, they called the bank, which in turn called GLS Gemeinschaftsbank eG to intercept the wire transfer. Luckily for Corcoran, the money had not reached their Chinese destination yet.

While Corcoran had a narrow escape, many other phishing victims aren't that lucky. Every year, hackers deploy phishing attacks against tens of thousands of targets with the purpose of swindling them out of cash. As a result, victims end up losing a considerable amount of money nationwide. If the FBI's Internet Crime Report is anything to go by, phishing attacks brought their perpetrators in excess of $60 million in 2019 alone. So far, such attacks are showing no signs of slowing down.

By Chance in Computer Security