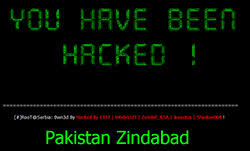 Cyber warfare can closely be compared to terrorism as those who mean to cause harm to humanity are hell-bent on wreaking utter havoc on the front of the Internet. In the latest events to take place involving hackers, a group of Pakistani hackers have placed a Bangladesh domain belonging to Google in their crosshairs and have successfully executed an attack to hijack and deface Google Bangladesh page.

Hackers who claim to be part of a group called Team Pak Cyber Attackers have taken responsibility for the attack on a Google Bangladesh search engine domain. Before attacking the Google site, the hackers were known for carrying out attacks on other Google websites, including the Vietnamese homepage search engine. Though, the recent attack on the Bangladesh Google site was an effort to alert the world of their actions by posting a message on the hacked page that includes their Pakistan Zindabad slogan, which in English it states "Long Live Pakistan."

As you would imagine, Google isn't one to delay restoring access and the proper page to a hacked website of theirs. Even though Google touts a rather robust network of websites and iron-clad security infrastructure, the hackers who were able to deface the search engine page utilized DNS hijacking methods. Such methods have been quite successful in the infiltration of many other sites on the Internet in the past.

High-profile sites are often the target of hacker groups. While the recent attack on the Google Bangladesh site isn't the first time that such a case as taken place, many of them have succumbed to aggressive and modernized DNS hijacking.

Security experts aren't clear as to the motives of the Pakistani hackers targeting Google's Bangladesh domain. However, there is a suspicion that the hackers were doing nothing more than bringing the weak security of certain sites to everyone's attention or making it known how they are able to successfully attack a high-profile site. Either way, such an attack is believed to have specific motives, and they may show their ugly face at a later date when the hackers accomplish another hijack of a large well-known site.