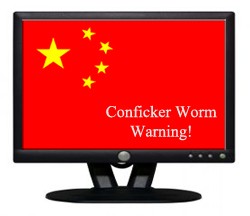 According to a recent report, about one-fourth of the total number of systems infected with a major variant of Conficker worm in 2009 was in China.

At the end of last year, China accounted for about 7 million IP (Internet Protocol) addresses that were infected with Conficker B which is a major variant of the worm that still affects computers today. An annual security report from China's National Computer Network Emergency Response Technical Team (CNCERT), was posted on their site indicating that the number of Conficker B infections was more than 5 million during the second half of 2009.

Conficker worm and the variant Conficker B are still around today and the systems infected with this dangerous worm still await instructions from the controllers. China could be a major harbor for a network of infected computers that are later used to launch a denial-of-service (DoS) attack. This would be done by the controllers ordering all of the infected systems to contact a victim server at the same time.

You may ask why China has such a large percentage of infected systems. It is rather simple, China has a large population of computers that do not use security software, about 4% of China's 380 million internet users. Software piracy is also a major factor as to why computers in China become infected with not only Conficker, but a multitude of malware parasites. Several unpatched versions of Windows XP are used which leave many security holes open and susceptible to attack.

China has reported a decline, about as many as half of infected computers, in the country's number of computers controlled by botnets and Trojans. Although there is a decline, it does not account for the number or systems that may be infected but lay dormant until the Trojan or botnet controller wakes them up to carry out attacks on other networks.

Do you take the risk of not running security software on your system? Have you installed all of the latest updates to patch recently discovered vulnerabilities within your Windows machine? If you are not sure, then now would be a great time to perform a free system scan for computer parasites.