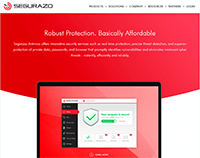 The Segurazo application, a/k/a SAntivirus, presents itself as a helpful, genuine antivirus tool capable of bringing considerable benefits to those who give it a chance. However, in reality, Segurazo is far from helpful and is certainly not as trustworthy a tool as one would expect from an antivirus application. Instead of effective threat detection and real-time protection, SAntivirus will bombard you with dozens of falsely exaggerated security reports in a relentless effort to urge you to buy the premium version of this dodgy tool.

In general, malware actors tend to distribute Potentially Unwanted Programs (PUPs) by smuggling them into software bundles containing all sorts of legit programs. Like any other PUP, Segurazo often lands on targeted PCs as part of a software bundle. You can inadvertently install one if you click on a deceptive pop-up ad, a fake Flash update, or a random free software bundle. Long story short, you may end up installing Segurazo alongside the original software you were looking for. Of course, that won't happen unless you go for a custom or advanced installation rather than a full one. That is why it is always useful to hand-pick the bundle components you wish to install while disregarding those with next to nothing to do with your original purpose.

If you still happen to let Segurazo install itself on your machine, be ready for a wave of exaggerated security reports. Those reports will be very likely to predict a bleak for your PC unless you purchase a premium Segurazo subscription. Such behavior is typical of any rogue antivirus application out there, and Segurazo makes no exception. The purpose is clear — to mislead you into believing that your system is under imminent threat due to the number of security issues found by the seemingly simple SAntivirus tool. The thing is, even if you do pay to unlock all the features Segurazo claims to have, you would still be unable to fix any of the imaginary issues outlined therein. Such intimidation technique works surprisingly well in general, which may explain why many PC users end up purchasing the full Segurazo antivirus package that would promise them to fix all existent (and even non-existent) security issues in their PCs.

When searching for a genuine antivirus solution, bear in mind that no legitimate application would resort to intimidation and social engineering tricks to urge you to get the full version of the product. Any application that does so is not trustworthy, and you should not waste your hard-earned money on it. To date, dozens of reputable antivirus program vendors have flagged the Segurazo application as unsafe, riskware, hack tool, or PUP.

If you want to purchase a subscription to a real-time online security service, make sure you do your research first and only trust applications from legitimate, reputable vendors. Once you’ve picked a robust software solution capable of doing the job, use it to remove Segurazo, as well as any other unwanted applications, from your system. If you wish to do it manually, you will need to perform a thorough search for deceptive programs on your Control Panel and suspicious extensions in your web browser(s). Those procedures may differ depending on your underlying OS and default browser.